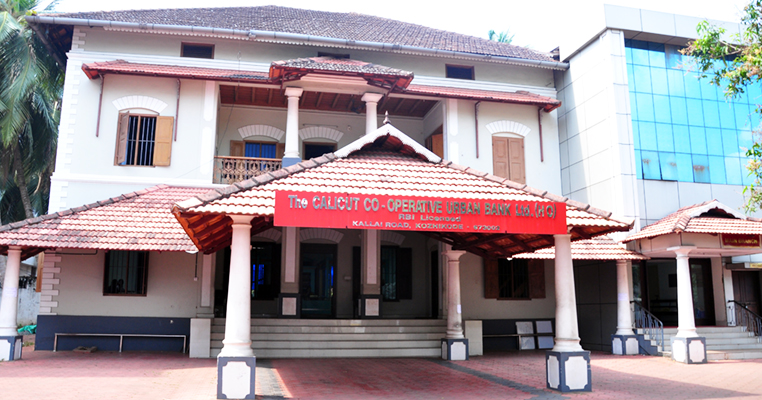 Co-operative movement occupies a unique place in the social and economic development of society. In the beginning of the last century some co-operative organisations had started functioning in Calicut in the same organized form as we find it today. The Calicut Co-operative Urban Bank started functioning on 6th June 1915 in a rented building in Court Road, Kozhikode. To begin with it had 147 members and a share capital of Rs. 1075/-.

Our founder President Sri. K. R. Ramaswami Iyer relinquished the office during 1916 and the Vice President Sri. D. Ganapathi Rao took over charge as President. He continued in the office till 1930. Our business profile of the Bank during 1930 were as under.

The General Economic slowdown has affected the functioning of the Bank since 1930. But undeterred by the situation, members and depositors met together and decided to carry forward the functioning of the Bank by foregoing the dividends on the shares and reducing the interest rates to the minimum. At this critical juncture Govt. announced a special scheme and provided financial assistance to the Bank.

Following the economic slowdown various persons occupied the office of the President of the Bank at various periods namely VIZ Sri. U. N. Sreenivasa Rao 1930 – 1933, Sri. F. J. D. Razario 1933 – 1938 and Sri. Ambalakattu Karunakara Menon 1938 – 1942 and they steered effectively the Bank during the economic slump.

Sri. Joseph N Kumar who had acted as President during the years 1942 – 1945, took over as President since 1945. During the period, the Bank shifted its premises from Court Road to a rented building near Kozhikode District Co-operative Bank at Kallai Road. The Bank has shown good progress during the period mainly due to the withdrawal of the 'Scheme' by the Government and Our Banks business position was as under

In 1950 Sri. Kerala Varma became president of the new governing body after the retirement of Sri. Joseph S Kumar. The untimely death of Sri. Kerala Varma led to the elevation of vice president Sri. Ramakrishna Menon as president. It was during his tenure that the Bank moved to its own spacious building in the heart of Kozhikode city where it purchased its own building in 1956 and started functioning there till this date.

The following persons as presidents during the period noted at against them.

The Bank came under the Banking Regulatory Act in 1965. The collection centre at Nadakavu which was functioning in a rented building become the first Branch in 1965 and it was shifted to its own building in 1973. Deposit insurance scheme was made applicable to the bank and the bank was allowed to collect interest higher than the rates provided by the commercial banks and there by attracting new members. These are some milestones in the path of the banks developments.

Adv. V. Sreekumara Menon was the longest serving president of the bank from 1977 – 1999. When the bank started expanding its activities, space constraint made the bank build a double storied building annex to the new branch. The Main branch functioned on the ground floor and the first floor housed the bank Head quarters. In 1990 the Bank celebrated its platinum jubilee and a hall was constructed on the second floor to mark the celebration. The bank joined the clearing house in 1982 and in 1986 Reserve Bank granted license to the bank. The bank was able to open two new branches, one at Mankavu and the other at Meenchanda in 1985. All this showed that the bank was its study path of development.

The present MLA Sri. A. Pradeep Kumar and Sri. M. Vasu were presidents during the year 1999 – 2004 and 2004 – 2009. Since 2003 the growth of the bank has been spectacular with the increase in deposits, retrieval of NPA, accumulation of Assets and increase in profit. The bank is now one of the leading co-operative urban banks in Kerala.

The present president of the bank is Sri. A. T. Abdulla Koya, who has been an employ of the bank since 1965. During his period the bank undertook the modernization of the Head Office and opened eight branches in the periphery of the Calicut city. The modernization process started with the introduction of core banking and in future the bank aims to introduce ATMs and RTGS and NEFT to facilitate easy transaction. The customers will be henceforth informed of the transactions through SMS. Talks are going on with the commercial banks to share the ATM facilities to the customers of the bank. The bank has strictly adhered to KYC Policy and customers have responded positively to this.

During the current year (2012 – 2013) the bank registered phenomenal progress with reduced NPA and increase in deposit – loan ratio. As in previous years the bank could give attractive dividend to the members this year also. On assessing the performance of the bank RBI gave good grading and cooperative auditors accorded 'A' classification to the bank. By, December 2013 the Clearing House System of the bank is to be based on cheque truncation.